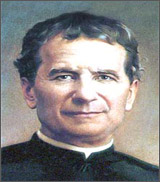 John Bosco was born on August 16, 1815, in a small town not too far from Turin, Italy. His father died when he was two years old. He was raised with tender love, yet firm discipline, by his mother, Margaret. He was ordained to the priesthood in 1841 and went to work in Turin, where the industrial revolution was attracting waves of young people to the city. The misery and abandonment of these youngsters moved John Bosco deeply.

He dedicated his life to them and began youth clubs for them. He then started hostels and boarding schools, where he taught them trades. In 1854 he founded the Salesian Society and in 1872, the Salesian Sisters to work for girls. Three years later, he sent the first missionary group to Argentina. His work spread throughout the mission world and today more than half the Society works in mission lands.

Joseph’s example of giving himself heart and soul through his life and work to God, and through God to Mary and Jesus, defines what being a loving husband and father involves. At the heart of the household of Nazareth was Mary, the beloved wife of Joseph and Mother of Jesus. Observing that God had joined them together in a real marriage, Pope Leo XIII wrote in Quamquam pluries, the only encyclical latter we have on St. Joseph: “When God gave Joseph as husband to the virgin, he gave him a companion in life, a witness to her maidenhood, a guardian of her honour.”

The educational philosophy of John Bosco can be condensed in three words: reason, religion, and kindness. The basic principle of his system was a deep understanding and love for young people and their problems.