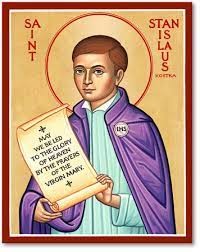 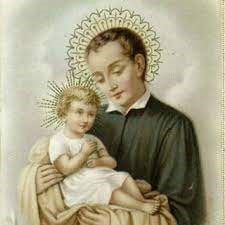 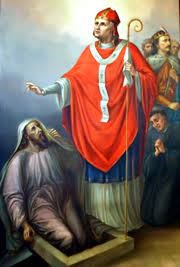 He was born on July 26, 1030 in Szczepanow, Poland. He was the only son of his parents Wielislaw and Bogna. He was ordained a priest by Lambert-II Sulo, Bishop of Krakow. After the death of bishop Lambert, Stanislaus was elected bishop of Krakow and accepted the office of bishop only when commanded by pope Alexander-II. He encouraged King Boleslaw to establish Benedictine monasteries to spread Christianity in Poland. Augustin Calmet, an eighteenth century bible scholar recorded a miraculous incident that happened in the life of bishop Stanislaus. Bishop Stanislaus purchased a piece of land from one Peter (Poitr). But after the death of Peter, his sons claimed the land from the bishop. King Boleslaw also was in favor of the sons of Peter. But the bishop asked the king three days’ time to bring witness for the sale by Peter and his legal purchase. After three days’ of intense prayers, Bishop Stanislaus went to the cemetery with a procession, opened the grave of peter and resurrected him from death. Peter was then covered with a cloak and brought before the king. Peter testified before the dumbfounded king about his actual sale of the land to the bishop and also reprimanded his three sons for their mischief of claiming the land. When Peter did not want to live anymore, he was again buried in the same grave. Bishop Stanislaus ex-communicated the King Boleslaw because the king became crueler towards his subjects and was immoral. The king wanted to kill Stanislaus without trial. The king personally killed Stanislaus when he was celebrating mass in the Shalka outside the walls of Krakow. His body was cut into many pieces and thrown into the pool outside the church. King Boleslaw was dethroned due the outrage caused by the murder of the bishop. Stanislaus was canonized by pope Innocent-IV on September 17, 1253. Pope John Paul-II called Saint Stanislaus the patron saint of moral order.

PRAYER FOR THE FEAST OF ST. STANISLAUS, Bishop and Martyr

Father,
to honour you, Saint Stanislaus
faced martyrdom with courage.
Keep us strong and loyal
in our faith until death.
Through our Lord Jesus Christ, your Son,
who lives and reigns with you
in the unity of the Holy Spirit,
one God, forever and ever.

Prayer of Intercession to St. Stanislaus

O God, in your providence, you have called your priest, St. Stanislaus, to make known the honor of the Immaculate Conception of the Blessed Virgin Mary and to assist the souls in Purgatory. Following the example of his apostolic life, grant, we pray, that we may also proclaim the fullness of innocence and sanctity of the mother of your Son, and invoking your mercy for the departed, may we safely arrive at our true homeland. Through Christ, our Lord.
Amen.

Prayer to Saint Stanislaus as your Patron Saint

Saint Stanislaus, my patron most tender and most powerful, angel of purity and seraph of love, I rejoice with thee in thy happy death, a death caused by thy longing to see Mary who was taken up bodily into heaven, and consummated by a mighty impulse of love toward her. I give thanks unto Mary who was pleased to hear and answer thy prayers, and I implore thee, by the glory of that thy happy death, to be the advocate and patron of my death. Intercede with Mary for me that my death, if not so happy as thine, may at least be peaceful under the protection of Mary, my Advocate, and of thee my special patron.

Dear Lord, we thank You for giving us Your martyr, St. Stanislaus, as an example of holiness. Help us to imitate the openness to Your will that he showed by answering Your call to serve You in the priesthood.

St. Stanislaus, you began your life in the household of pious parents. From the foundation in the Faith that they gave you, you continued on the path of virtue and openness to God’s will for you.

Pray that all who are called to serve God in a religious vocation may respond generously to His call!

You willingly chose to serve God in the priestly vocation. As a priest, you carried out your vocation faithfully and grew in virtue. You inspired others with your holy example and your preaching.

Pray for me, that I may be open to the path of holiness God calls me to in my life.

St. Stanislaus, pray for us!