Your donation can make a difference. The St. Michael Center for the BLESSED VIRGIN MARY a non-profit Catholic lay apostolate, loyal to the Holy Father and to the teachings of the Magisterium of the Catholic Church.

St. Michael the Archangel, defend us in battle; be our safeguard against the wickedness and snares of the devil. May God rebuke him, we humbly pray. And do you, O prince of the heavenly host, by the power of God, cast into Hell Satan and all the evil spirits who prowl about the world seeking the ruin of souls. Amen 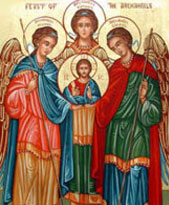 Get to know and speak to your Guardian Angel

MAY ALL THE ANGELS PROTECT YOU AND YOUR FAMILY. START YOUR 9-DAY NOVENA

The feast of the three archangels- Sts. Michael, Gabriel and Raphael- will be commemorated on September 29.

St. Michael whose name means “Who is like God” was the archangel who fought against Satan and all his evil angels, defending all the friends of God. He is the protector of all humanity from the snares of the devil. St. Gabriel which means “Strength of God” announced to Zachariah the forthcoming birth of John the Baptist, and to Mary, the birth of Jesus. His greeting to the Virgin, “Hail, full of grace,” is one of the most familiar and frequent prayers of the Christian people. St Raphael meaning “Medicine of God” is the archangel who took care of Tobias on his journey.

How The Prayer Of St. Michael Came To Be Written

The Chaplet of St. Michael Archangel

INSPIRATIONAL VIDEOS FOR EVERY PERSON

QUOTE OF THE MONTH

Dear brothers and sisters, our meditation on the human and spiritual journey of Saint Joseph invites us to ponder his vocation in all its richness, and to see him as a constant model for all those who have devoted their lives to Christ in the priesthood, in the consecrated life or in the different forms of lay engagement. Joseph was caught up at every moment by the mystery of the Incarnation. Not only physically, but in his heart as well, Joseph reveals to us the secret of a humanity which dwells in the presence of mystery and is open to that mystery at every moment of everyday life. In Joseph, faith is not separated from action. His faith had a decisive effect on his actions. Paradoxically, it was by acting, by carrying out his responsibilities, that he stepped aside and left God free to act, placing no obstacles in his way. Joseph is a just man (Mt 1:19) because his existence is adjusted to the word of God. Pope Bendict XVI, March 18, 2009 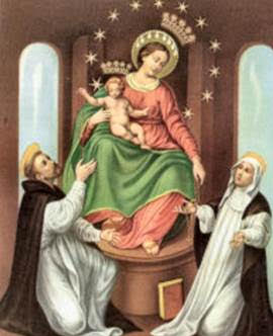 On October 7, the Catholic church will celebrate the feast of Our Lady of the Rosary. This was established by Saint Pius V on the anniversary of the naval victory won by the Christian fleet at Lepanto, October 7, 1571. The victory was attributed to the help of the holy Mother of God whose aid was invoked through praying the Rosary.

The Rosary is one of the best forms of prayer . Mary promised to Christians who faithfully pray the rosary that it is a powerful armor against hell and it will destroy vice, decrease sin and defeat heresies. It will cause virtue and good work to flourish; and it will obtain for souls the abundant mercy of God. The faithful children of the rosary shall merit a high degree of glory in heaven. You shall obtain all you ask of me by the recitation of the rosary.

The celebration of this day invites all to mediate upon the mysteries of Christ, following the example of the Blessed Virgin Mary who was so singularly associated with the incarnation, passion and glorious resurrection of the Son of God. May we all draw closer to Jesus and Mary by praying the Rosary more devoutly and faithfully.

MIRACLES OF OUR LADY OF GUADALUPE

City of Santa Fé, in New Mexico, USA.
A mystery of over 130 years and attracting around 250 thousand visitors every year. Point of attention : Loretto Chapel What makes this...

“O Glorious Prince of the heavenly host, St. Michael the Archangel, defend us in the battle and in the terrible warfare that we are waging against the principalities and powers, against the rulers of this world of darkness, against the evil spirits. Come to the aid of man, whom Almighty God created immortal, made in His own image and likeness, and redeemed at a great price from the tyranny of Satan.

“Fight this day the battle of the Lord, together with the holy angels, as already thou hast fought the leader of the proud angels, Lucifer, and his apostate host, who were powerless to resist thee, nor was there place for them any longer in Heaven. That cruel, ancient serpent, who is called the devil or Satan who seduces the whole world, was cast into the abyss with his angels. Behold, this primeval enemy and slayer of men has taken courage. Transformed into an angel of light, he wanders about with all the multitude of wicked spirits, invading the earth in order to blot out the name of God and of His Christ, to seize upon, slay and cast into eternal perdition souls destined for the crown of eternal glory. This wicked dragon pours out, as a most impure flood, the venom of his malice on men of depraved mind and corrupt heart, the spirit of lying, of impiety, of blasphemy, and the pestilent breath of impurity, and of every vice and iniquity. 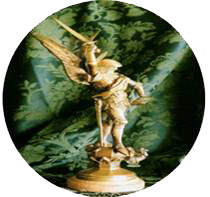 “These most crafty enemies have filled and inebriated with gall and bitterness the Church, the spouse of the immaculate Lamb, and have laid impious hands on her most sacred possessions. In the Holy Place itself, where the See of Holy Peter and the Chair of Truth has been set up as the light of the world, they have raised the throne of their abominable impiety, with the iniquitous design that when the Pastor has been struck, the sheep may be.

“Arise then, O invincible Prince, bring help against the attacks of the lost spirits to the people of God, and give them the victory. They venerate thee as their protector and patron; in thee holy Church glories as her defense against the malicious power of hell; to thee has God entrusted the souls of men to be established in heavenly beatitude. Oh, pray to the God of peace that He may put Satan under our feet, so far conquered that he may no longer be able to hold men in captivity and harm the Church. Offer our prayers in the sight of the Most High, so that they may quickly find mercy in the sight of the Lord; and vanquishing the dragon, the ancient serpent, who is the devil and Satan, do thou again make him captive in the abyss, that he may no longer seduce the nations. Amen.

V. Behold the Cross of the Lord; be scattered ye hostile powers. R. The Lion of the tribe of Judah has conquered the root of David. V. Let Thy mercies be upon us, O Lord. R. As we have hoped in Thee. V. O Lord, hear my prayer. R. And let my cry come unto Thee.

O God, the Father of our Lord Jesus Christ, we call upon Thy holy Name, and as supplicants, we implore Thy clemency, that by the intercession of Mary, ever Virgin Immaculate and our Mother, and of the glorious St. Michael the Archangel, Thou wouldst deign to help us against Satan and all the other unclean spirits who wander about the world for the injury of the human race and the ruin of souls. Amen.”

MEDIA ASSAULT ON PRIESTS ARE BIAS AGAINST THE CATHOLIC CHURCH

Beware Catholics don’t be fooled by the fake demonic media who are merciless towards good priests.

12% of 300 Protestant clergy surveyed admitted to sexual intercourse with a parishioner;
38% acknowledged other inappropriate sexual contact in a study by the United Methodist Church ,
41.8% of clergy women reported unwanted sexual behavior;
17% of laywomen have been sexually harassed.

The Miracle Prayer by Fr Peter Rookey Lord Jesus, l come before You, just as I am. I am sorry for my sins, I repent of my sins, please forgive me In Your name, I forgive all others for what they have done against me. I renounce Satan, the evil spirits and all their works. l give You my entire self. Lord Jesus, now and forever, I invite You into my life Jesus, I accept You as my Lord, God and Saviour. Heal me, change me, strengthen me in body, soul and spirit.Â Come Lord Jesus cover me with Your precious blood, and fill me with Your Holy Spirit, I love You Lord Jesus. I praise You Jesus. I thank You Jesus. I shall follow You every day of my life. Amen.

SAY ” THE MIRACLE PRAYER ” ! BELIEVE IN MIRACLES. GOD LOVES YOU !

support Our Ministry by enabling us to Evangelize to the Youth. Help us spread the Gospel and increase devotion to Our Lady. Help us give Hope and encourage others through prayer and love.

PRIEST OF THE MONTH

ST. MICHAEL THANKS THESE SAINTLY AND COURAGOUS PRIESTS IN HEAVEN
Eternal rest grant unto him, O Lord, and let perpetual light shine upon him.
http://www.servite.org/about/InternationalCompassionMinistry.aspx

CLICK HERE FOR A VIDEO TRIBUTE TO FR. PETER ROOKEY 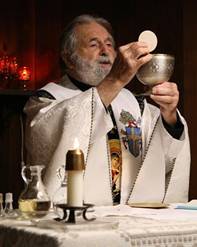 It is with great sadness that we announce the passing of Fr. Peter M. Rookey, OSM.Fr. Peter died peacefully in his sleep in the overnight hours of September 9-10, 2014, at Our Lady of Sorrows Monastery, Chicago, IL. The friars of the community had gathered around his bed to offer prayers.Born in Superior, WI, October 12, 1916, he was ninety-seven years of age. He entered the Order at Hillside, IL, in 1930 and was a priest for seventy-three years.
(VISIT http://www.servite.org/about/InternationalCompassionMinistry.aspx)

Eternal rest grant unto him, O Lord, and let perpetual light shine upon him. 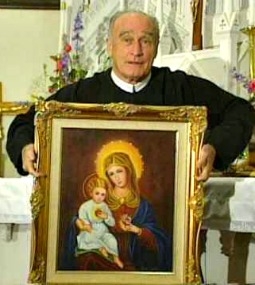 CLICK HERE FOR A VIDEO TRIBUTE TO FR PABLO STRAUB

PHOTO OF THE MONTH