How The Prayer Of St. Michael Came To Be Written 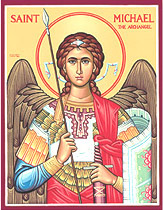 It is impossible to understand why the prayer to St. Michael came to be omitted after all Low Masses on Sunday, especially now when we need the protection of this angelic warrior more than at an other time in history. We wish the Church authorities would reinstate the great prayer to St. Michael, and perhaps that would happen if we respectfully petitioned of bishops. In the meantime, we can all say the prayer privately in our homes, chapels and churches. We need this prince of the heavenly host in the present struggle.

Pope Leo XIII, realizing by Divine enlightenment the present and future struggles of the Church against the powers of hell, felt convinced that through the intervention of St. Michael, hell would be conquered, and the Church restored to peace and liberty. He therefore composed a prayer in honor of the warrior archangel, and ordered it to be recited daily after Los Mass in all the churches throughout the Christian world.

This is how this prayer came to be written: It is said that one day having celebrated the Holy Sacrifice, the aged Pontiff Leo XIII was in conference with the Cardinals. Suddenly he sank to the floor in a deep swoon. Physicians who hastened to his side feared that he had already expired, for they could find no trace of his pulse. However, after a short interval the Holy Father rallied, and opening his eyes exclaimed with great emotion: “Oh what a horrible picture I was permitted to see!” He had been shown in spirit the tremendous activities of the evil spirits and their ravings against the Church. But in the midst of this vision of horror he had also beheld consoling visions of the glorious Archangel Michael, who had appeared and cast Satan and his legions back into the abyss of hell. Soon afterward he composed the well-known prayer.

We know that the gates of hell shall never prevail against the Church, for Our Lord has promised to be with her till the end of time, but we must do our part in defending her cause. God might cast the angels down to hell by a single act of His will, but He chose rather to send against them His armies of loyal spirits, under the leadership of the great St. Michael. So too, in the present critical times, He could confound the enemies of the Church by merely willing to do so. But He wills, rather, that we should cooperate in her defense, under the leadership of the great captain of the heavenly hosts.

“May prayer strengthen us for the spiritual battle we are told about in the Letter to the Ephesians: “Draw strength from the Lord and from His mighty power” (Ephesians 6:10). The Book of Revelation refers to this same battle, recalling before our eyes the image of St. Michael the Archangel (Revelation 12:7). Pope Leo XIII certainly had a very vivid recollection of this scene when, at the end of the last century, he introduced a special prayer to St. Michael throughout the Church. Although this prayer is no longer recited at the end of Mass, I ask everyone not to forget it and to recite it to obtain help in the battle against forces of darkness and against the spirit of this world.”