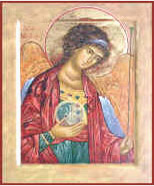 Italy has an endless list of interesting places to visit due to its Faith, history, beautiful countryside and the Italians love of art. One such place in Monte Sant’ Angelo only a forty minute drive from San Giovanni Rotondo.

The town of Monte Sant’ Angelo was built on a spur 850 meters above sea level which overlooks both Gargano Massif and the sea. Dominated by the ruins of Norman Castle it has kept its ancestral customs and its ancient appearance with whitewashed houses squeezed together onto rapidly sloping mountainside. The surrounding land is all rock and could easily be mistaken for the West of Ireland.

Interest in this lovely spot is due to the apparitions of St. Michael The Archangel. The Prince of the Heavenly Hosts was prefigured in the Old Testament: Michael in Hebrew means “one who is like God.” There was devotion to him in the Eastern Church but not in the Western Church until after these Apparitions took place; it is from here that St. Michael became known throughout Europe and the new world.