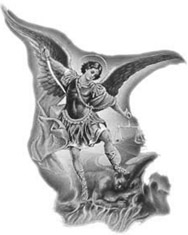 God had made Heaven and the Earth and all the Angels and all the extra important Angels,called Archangels. (Like an extra important Bishop is called an Archbishop.) The Archangels were God’s very special friends and were Shining and Strong and Powerful. One Archangel was called Gabriel. He was the one that God sent to tell Our Blessed Lady that She was to become the Mother of God, the Mother of Jesus Christ, our Lord and Savior. Another Angel was called Raphael; he was the one who helped Tobias in the Bible. Another Archangel was called Michael. Michael was “the Angel of the Lord”, who was sent to Moses and Jacob and Abraham and to other people throughout the history of the world. Another Archangel was Lucifer, who was so beautiful that the other Angels called him the Son of the Morning.

Well, everybody was very happy because they were with God, and they all loved him, because he had made them so Strong and Shining and Lovely. Then one day Lucifer, Son of the Morning, said to himself: “Why should God be the most important person in Heaven? Why, shouldn’t I be? I can fly and I can change into other things, and I am beautiful and I am powerful. In fact, I am just as Important as God, and I shan’t do what He tells me ever again. I shall fight Him and have Heaven for mine!”

So, Lucifer went around Heaven, and he collected a lot of other Angels who also didn’t want to be less Important than God, until he had a Great Army. Then they marched up to the Throne of God and said Proudly: “We are just as Important as You. Why should You be the King of Heaven any more than one of us? We are Strong and Proud and Beautiful, and we will fight You for the Kingdom of Heaven.” God looked at them; then He said: “Lucifer, I thought that you were My friend, and I trusted you. Be sensible now, and think about what you are doing.” “I have thought,” said Lucifer, “and, I’d rather not be in Heaven at all than have You for my King, and so would all of us!” And behind him all the Rebel Angels shouted with a great shout: “We will follow Lucifer! Long live Lucifer! Let him reign over us in Heaven! WE DO NOT WANT GOD!” “Very well,” said God, “if you don’t want Me, you needn’t have Me. But, if you want to fight for Heaven, you can if you think it will be any good.” Then, God called Michael the Archangel, and made him gather together a Mighty Army of Angels who were on God’s side.

So, now you know why we sometimes say in our prayers, “Holy St. Michael the Archangel, defend us in the Day of Battle,” because he is so good at battles.

But, what happened to Lucifer and his Rebel Angels? Well, he was so furious and enraged at having lost his Battle with God that he has never gotten over it. You see, he is never allowed inside Heaven anymore forever and ever and ever; and, now that he can’t go into Heaven anymore, he is angry about it. So, in Revenge, he does everything horrible to God that he can. His worst feeling is Jealousy; whom do you suppose he is jealous of? Us! Why? Because when Our Lord Jesus was Crucified, He opened the Kingdom of Heaven for us to go in! So Lucifer, whose other name is Satan, or the Devil, is furious because we Ordinary People are allowed into Heaven, and he, an Archangel, is not. So, he and his angels (or demons) try always and always to stop us going into Heaven by giving us bad Ideas, and making us do things that we know are wrong, so as to hurt God. So, whenever you want to do or say something horrid, think of the Great Battle in Heaven and remember that it is Lucifer trying to keep you on his side. If you don’t do or say it, you have won and have stayed on God’s side.

St. Michael’s Special Day is September 29th; it is the Feast of St. Michael, St. Gabriel and St. Raphael, and of All Angels, because of all the Angels who helped him win the Battle with Lucifer.