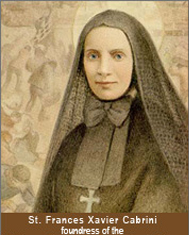 The dioceses in the United States celebrate the memorial of St. Frances Xavier Cabrini, the virgin, on November 13. This Italian-born saint was the first United States citizen to be canonized. St. Frances’ missionary spirit was awakened in her as a little girl when her father read stories of the missions to his children. She helped the pastor teach catechism and visited the sick and the poor. She also taught school in a nearby town, and for six years supervised an orphanage assisted by a group of young women.

St. Frances came to America in as a missionary and founded the Missionary Sisters of the Sacred Heart to care for poor children in schools and hospitals. The orphanage she established set out a lifework that comprised the alleviation of every human need. St. Frances also erected erected schools, kindergartens, clinics, orphanages, and foundling homes for the children. Shew even constructed a numbers of hospitals for the needy sick.

Frail and diminutive as she is, St. Frances showed such energy and enterprise that everyone marveled. She crossed the Atlantic twenty-five times to visit the various houses and institutions. In 1909 she adopted the United States as her country and became a citizen. After thirty-seven years of unflagging labor and heroic charity she died alone in a chair in Columbus Hospital at Chicago, Illinois, while making dolls for orphans in a preparation for a Christmas party. At her death over five thousand children were receiving care in her charitable institutions, and at the same time her community had grown to five hundred members in seventy houses in North and South America, France, Spain, and England. Saint Frances is the patron saint of hospital administrators; immigrants and orphans.

Miracle of Our Lady of Fatima

24th May MARY HELP OF CHRISTIANS