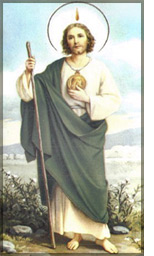 The Catholic community celebrates the Feast of Saint Jude Thaddeus- the Miraculous Saint on October 28. Saint Jude is the patron saint of “lost causes” and “cases despaired of”. When all other avenues are closed, he is the one to call upon, and his help often comes at the last moment. He is one whose aid is sought when all hope is lost, especially in grave health matters and life-and-death situations.

Saint Jude Thaddeus was closely associated with our Lord by blood relationship. He preached in Preached in Syria, Mesopotamia, and Persia with Saint Simon. At the same time, Saint Jude is a healer and exorcist. He could exorcise pagan idols, which caused the demons to flee and the statues to crumble.

This miraculous saint is an author of an epistle (letter) to the Churches of the East, particularly the Jewish converts, directed against the heresies of the Simonians, Nicolaites, and Gnostics. However, he is known mainly as the author of the New Testament Epistle of Jude He is invoked in desperate situations because his New Testament letter stresses that the faithful should persevere in the environment of harsh, difficult circumstances, just as their forefathers had done before them.

For more information on Saint Jude, kinldy click on the following links:

Miracle of Our Lady of Fatima

24th May MARY HELP OF CHRISTIANS