OUR LADY OF LOURDES – Healing

Our Lady of Lourdes

February 11
The Virgin Mother, Mary, appeared on February 11, 1858 to a sickly child named Bernadette who was 14 years old then. It is called the feast day of Our Lady of Lourdes because it is in Lourdes, France that Mary appeared.

Mary told the girl to drink of a mysterious fountain within the grotto itself, the existence of which was unknown, and of which there was no sign. On another occasion the apparition bade

Bernadette go and tell the priests she wished a chapel to be built on the spot and processions to be made to the grotto.

The grotto is being visited by many pilgrims especially those who are sick because it is believed that you will be healed. And many other miracles can happen after you visit the grotto.

What do you think about apparitions?

Our Lady of Lourdes reminds us all of one of the greatest apparitions of all times in the history of the Catholic Church and the intercession of Our Lady. In Lourdes she brought us the message of prayer and healing. Today as apparitions continues and yet so many do not believe. Are apparitions accompanied by Our Lady’s tears a sign for all humanity? How about you, do you believe in apparitions? Tell us what you think. Bishops, priests and faithful have flocked to apparitions sights around the world. We live in an unstable world politically and economically. Our Lady has messages for the world: prayer, fasting, confession and conversion!

Today, the weeping of statues of Our Lady continues, recently in Sacramento, California and in Naju, Korea. You can visit www.marys-touch.com and read Church Teachings on Marian apparitions. What do you think Our Lady is concern about? Is she trying to warn us and our children because of so much war and sin in the world?

Click here to listen to the Miracle Prayer recited by Father Rookey in MP3 format!

The Power of Prayer for Healing 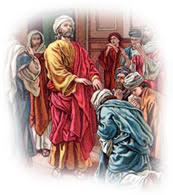 February is the month of healing and suffering. Hearing the words suffering and healing, we often think of people who are sick and needed to be healed through prayers and medical assistance. But let us also remember that all people experience suffering though it is not through grave sickness. Emotional and psychological problems can be considered as suffering.

Pope John Paul II’s constant attention to the poor is one of the characteristics of his pontificate. In his 1984 apostolic letter “Salvifici Doloris” he addressed the Christian meaning of human suffering.

February 11 is the Feast day of OUR LADY of LOURDES, the late Pope John Paul II who is very much devoted to Blessed Mother believes in the intercession of Mary. In line with this in 1992, the Holy Father instituted the World Day of the Sick, to be observed every year on Feb. 11, liturgical memorial of the Virgin of Lourdes. In 1993 he established the Pontifical Council for Health Care Workers.

“This revolution in thought and morals has often flown the ‘flag of freedom,’ but in fact it has brought spiritual and material devastation to countless human beings, especially the poorest and most vulnerable.”

“It is also painful to see that the struggle against hunger and malnutrition is hindered by ‘market priorities,’ the ‘primacy of profit’, which have reduced food to a commodity like any other, subject to speculation, also of a financial nature. And while we speak of new rights, the hungry remain, in the street corner.”

Pope Francis sends message for 2015 World Day of the Sick

Pope Francis has issued a powerful message for the World Day of the Sick, which takes place on February 11th.

The Pope thanked those who care for the sick, adding that time spent with the ill, is sacred. He also calls for Catholics to embrace wisdom of the heart.

“Occasionally our world forgets the special value of time spent at the bedside of the sick, since we are in such a rush; caught up as we are in a frenzy of doing, of producing, we forget about giving ourselves freely, taking care of others, being responsible for others,” writes the Pope.

Full Text: Pope’s message for the World Day of the Sick 2015