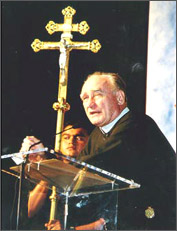 A missionary priest, Father Pablo spent 20 years evangelizing Puerto Rico, the Philippines and Peru. Father has spent the last 16 years in rural Mexico. Father Pablo preaches the Word of God in both Mexico and the United States; directing missions and retreats. He appears on EWTN and Mexican Catholic television. Father Pablo is currently helping found two new Religious Orders, one of missionary Sisters and one of future priests. The orders, The Consecrates of the Most Holy Savior, are both missionary and contemplative and are located in the State of Guerrero on the lower Pacific coast of Mexico.

Young people from Mexico, Centeral and South America and the U.S. are coming forward and asking what they must do to join the new Religious Orders. For this reason, Father is actively engaged in building, at a point two miles from the Pacific upon the foothills of the Sierra Madre, a seminary and motherhouse for the future priests’ Order and a convent-motherhouse for the Sisters’ Order. Currently, the missionary Sisters are sleeping in a temporary convent and the future priests have been sleeping in the classroom building.

People wanting to learn more about the Order or offer help for the constuction of the seminary-motherhouse and the convent-motherhouse can contact Father Pablo’s office in the U.S.