Jesus Died for us . Pray for World Peace. Our Lady of Fatima !
Pray for Peace between USA and CHINA

The USA and CHINA FLAGS in FATIMA, PORTUGAL
The Shrine for World Peace 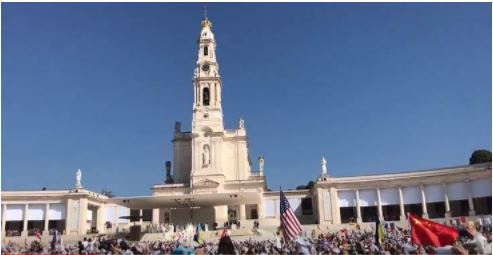 A CHINESE VIDEO FOR JESUS https://saintmichaelusa.org/jesus-loves-china.php

OUR LADY OF FATIMA 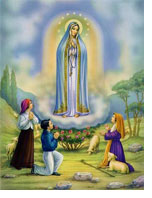 The Blessed Virgin Mary is venerated as Our Lady of Fatima following the famous apparition to the three shepherd children -Lucia, Jacinta and Francisco- which took place during the First World War, in the summer of 1917. The Mother of God appeared six times near the town of Fatima, Portugal between May 13th and October 13th 1917 to the three children and told them that She had been sent by God with a message for every man, woman and child living in our century.

Through the children Mary urged prayer for the conversion of sinners and an end to the war, recitation of the Rosary, and works of penance. The message of Fatima included a call to conversion of heart, repentance from sin and a dedication to the Blessed Virgin Mary, especially through praying the Rosary.

Our Lady of Fatima promised that the whole world would be in peace, and that many souls would go to Heaven if Her requests were listened to and obeyed. She told us that war is a punishment for sin; that God would punish the world for its sins in our time by means of war, hunger, persecution of the Church and persecution of the Holy Father, the Pope, unless we listened to and obeyed the command of God. The message is an anguished appeal of our Heavenly Mother, Who sees us in great danger and Who comes to offer Her help and advice. Her message is also a prophesy, a clear indication of what was about to transpire infallibly in the near future, depending on our response to Her requests.

But Mary also confided several “secrets” to the children, some of which Lucy subsequently transmitted. The Secret actually consists of three parts, the first two of which have been publicly revealed. The first part of the Secret was a horrifying vision of hell where the souls of poor sinners go” and contained an urgent plea from Our Lady for acts of prayer and sacrifice to save souls. The second part of the Secret specifically prophesized the outbreak of World War II and contained the Mother of God’s solemn request for the Consecration of Russia as a condition of world peace. It also predicted the inevitable triumph of Her Immaculate Heart following Russia’s consecration and the conversion “of that poor nation” to the Catholic Faith.