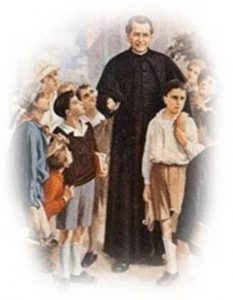 Don Bosco was born in the hamlet of Becchi, not far from Turin in northern Italy, on 16th August 1815. His father died before he reached two years of age, and his mother Margaret, a saintly woman, gave him a healthy religious upbringing.

Like St. Joseph in the Gospels, God spoke to John Bosco in his dreams, and in this way revealed to him many future events.

Already at the age of nine, John Bosco had the first of these man prophetic visions of “dreams” as he preferred to call them.

In this vision, a lady told him that he would be called to bring the Gospel to young people.

While still a teenager, John would often gather a group of boy together, and entertain them. He had a gift for conjuring and this he coupled with religious instruction, using stories from the lives of the saints of from the Bible, and finishing up with a hymn of decade of the Rosary.

After some initial difficulties he managed to undertake studies for the priesthood and was ordained on June 5th, 1841. Several months later his first “dream” became a reality. On the feast of the Immaculate Conception, December 8, 1841 Don (“Father”) Bosco was vesting for Mass, when the sacristan noticed a boy nearby and asked him to server the Mass. The boy replied ashamed, “I cannot.” The sacristan insisted and when the boy again refused, gave out to him and chased him away. But Don Bosco called the boy back, asking him to stay for Mass.

Afterwards Don Bosco talked to the boy and learned that he was an orphan and although already sixteen, could neither read nor write nor had he made his First Communion. He didn’t go to instructions because he was too big for children’s classes.

“If I give you instruction alone, would you come?” Don Bosco asked.

After first saying the a “Hail Mary” for help, Don Bosco gave the lad instruction for half an hour, beginning with the Sing of the cross. He then gave him a medal of Our Lady and asked him to come back on the following Sunday.

That Sunday the boy brought other boys with him and soon the famous “Oratory” had become a reality in Turin.

Don Bosco Spent his Sundays from dawn till nightfall with his boys, teaching them, playing them, saying Mass for them, hearing their confession and taking them on walks through the countryside. The group would meet in a field of church, but eventually Don Bosco was given an old barn. Slowly, by stages, this grew into the immense Salesian Mother House, the world famous Oratory of Turin

But Don Bosco had a lot of work to do before his would come about.

After a while many of the boys started to come not only on Sundays and Feast Days, but also during the week in the evenings after school or work. Don Bosco realized that the boys needed more than one day a week with him, and began to allow them to stay in his house during the week. He set up a school for them while his own mother became a mother to them. Together they trained the boys in good habits and frequent use of the sacraments and gave them an education.

As some of the boys started to join the seminaries and become priests, Don Bosco’s reputation as an educator of youth grew. Requests started to come for him to set up hi “oratory” in other places. He soon came to realize that he needed to set up a religious order.

He began to prepare the best and most reliable of his young assistants and with ecclesiastical approval, the Salesian Society came into existence.

Today it is the third largest congregation for men in the Catholic Church.

By 1874 Don Bosco had obtained final approval for both the Salesian Society and an order of nuns, the Daughters of Mary, Help of Christians.

The nuns were to do for girls what the Salesian Society was doing for boys.

There were many obstacles put in Don Bosco’s way in this work, but he managed to overcome them with the support of the different Popes whom he was always close to.

Don Bosco was a gifted educator of youth. A wonderful example of this was when he sought and eventually obtained permission from the Minister of Home Affairs to take out for a day in the country the youth in a detention center.

Under his care, the young people flocked out of the gates of their institution. They had a glorious day in the country and all returned to their place of detention in the evening, grateful to Don Bosco and with generous resolutions to make up for the past.

Special place for Our Lady

Our Lady had appeared to Don Bosco in his first “dream” at age nine and sent him his first pupil on the feast of her Immaculate Conception.

Don Bosco constantly turned to her for help and guidance. He taught all his boys a deep and tender devotion to Our Lady and to invoke her, especially under the title Help of Christians.

This led him eventually to build the greatest church of the Salesian Society, the famous Basilica of Mary Help of Christians in Turin

Don Bosco had an extraordinary gift of prophecy and foretold many things about the future of his Salesian Society. He also foretold public events, papal election, the rapid recovery of many who were ill and the imminent death of several great figures. In fact for many years not on pupil of the Oratory died without his foretelling it quite a long time before.

Among Don Bosco’s many prophetic visions, some were spreading the Gospel in mission lands. Gradually this began to happen, and the Congregation started to spread its work to mission territories, fulfilling Don Bosco’s prophecies one by one.

In his later years Don Bosco was sought after wherever he went. People of all ranks and classes came to him for advice or help, including many Cardinals and Ministers of State. On the other hand, many priests and lay people had helped Don Bosco with his work over the years. This eventually led to the foundation of the their main branch of Don Bosco’s work, the Association of Salesian Cooperators. The Popes of the time not only gave it their approval and blessing, but even placed themselves at the head of the list of members. Soon the Association had spread all over the world.