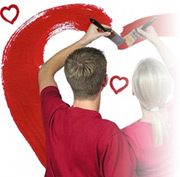 In today’s culture it often seems as though dating has become more of a common past-time and less a search for a suitable marriage partner. Because of this, along with the general decline of moral standards in society, it is often the case that unmarried couples become so physically involved with one another that they can no longer clearly see what is appropriate and modest behavior before God. This is unfortunate, because it is difficult to discern a life-long marriage partner when the eyes of the couple are clouded by uncontrolled sexual passions and desires.

Among dating couples who do desire to live in the grace of God, some of the common questions asked are, “What are we allowed to do?” “Have we gone too far?” “Have we sinned?” There are some general rules that unmarried couples should abide by in order to foster the virtues of chastity, charity and self-control in the relationship so that the couple can truly come to know one another and God’s Will for them.

First of all, we must look at the actions of the couple itself.
There are two very different kinds of actions.

The first is the action that is, by its very nature, so closely related to the sexual desires that they serve no other purpose except to stimulate and arouse the persons involved. Some examples of these would be: prolonged and passionate kissing, impure embracing or petting, and sexual intercourse.

These actions are always gravely wrong between unmarried people, and no “good intention” can ever make them right. If the action is committed intentionally and with sufficient reflection, then it is a mortal sin. If there is no reflection, as can happen sometimes when an impure action occurs without any forethought or intention at all, one does not sin mortally. However, it does not change the fact that the act itself was gravely wrong and one should be very careful not to let it happen again.

The second kind of action is anything that is in and of itself morally good or neutral, which does not have as its sole purpose the stimulation of the sexual passions. Some examples of these would be: dancing with a boyfriend/girlfriend, holding hands, kissing, affectionate or friendly embracing. While these acts are good or neutral in and of themselves and serve another purpose entirely, they can still have the effect of causing one to become aroused.

Is this then sinful? For every person, the answer can be different, according to his or her intent for doing the action.

Any boy who has the intention of dancing with a girl in order to become aroused, or in order to arouse her, has already sinned against chastity and charity even though the dance itself might have been morally neutral. His intent was impure. Another example would be if that same boy found that while affectionately embracing his girlfriend he became aroused, and he continued to embrace her with the intent of further arousing himself or arousing her, even though the embrace itself was nothing at all impure.

Near Occasions of Sin

Since people are different, different things can be for them near occasions of sin. By near occasion of sin we mean anything that “sets the stage” TO sin. For example, a couple may know from experience that every time they sit alone in the dark watching movies, the situation between them almost always tends to “go too far.” For the sake of their souls then, it would be prudent for them to watch movies with the lights on, or with other friends in the room.

What if they continue doing what they know causes them to sin gravely? Then that too would be sinful, since intentionally putting oneself in an occasion of sin is a sign that one is willing to flirt with disaster – one is willing to sin, if it “just happens.”

There are three basic things to keep in mind while dating: