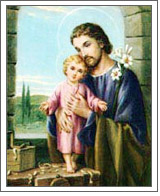 The splendid manifestation of devotion to Saint Joseph that have occurred in ever-increasing measure during the last one hundred years call for a word of explanation. How can we explain this phenomena? Christian piety calls for more than enthusiasm in its devotion to a saint; it needs to be nourished with a better understanding of the rich insights that have been unlocked by exegetes and theologians, as well as the reflections of the saints. In view of the enormous spiritual advantages they derived from this devotion, the insights of the latter command our attention and respect.

How often the heart anticipates conclusions later drawn by learned theologians! Herein lies the greatness of the heart. But, conversely, the heart is often unsure and filled with doubts. In the case of devotion to Saint Joseph, has this not often been the case? Many love him spontaneously and deeply, but wonder if their belief and faith are tempered with the appropriate measure of discretion.

The interests of a saint are best served by steering a safe course between the danger of exaggerating his importance on the one hand, and the possibility of minimizing his greatness on the other. His true position in salvation history will, it is hoped, emerge from the study of the following: his place in Sacred Scripture; the writings of theologians; devotion to Saint Joseph as proposed by the Church.